"this result has changed everything and we will never forget what you and Kingsley Napley have done for us.’ A client, obstetrics negligence claim

Richard Lodge settles cerebral palsy claim complicated by the occurrence of a perinatal stroke for £4,783,100 plus annual payments for care

We regularly achieve multi-million pound settlements for children injured at birth, many of whom suffer from cerebral palsy (CP).

These claims can be complex. We are very experienced in this field and will make the process as easy as possible.

Families often contact us when they believe there has been a problem during or after the birth of their child. We have been successful in bringing claims on behalf of disabled children for many years.

If you are concerned that your child may have been harmed because of poor medical treatment, please contact us to discuss how we can help.

You might simply have concerns about your child’s development together with questions about the medical care which you and your child received. Alternatively, you may already be coming to terms with the significant impact of caring for a child with a diagnosis of CP. You may have been told that your child suffered hypoxia (lack of oxygen) at birth or that they required therapeutic cooling to lessen the possibility of brain injury. We can provide guidance in all of these situations.

When bringing a claim, we investigate the circumstances of a child’s birth, with medical experts, to consider whether the child has sustained serious injury as a result of medical negligence on the part of a hospital, doctor or midwife. If negligence is established, compensation can be claimed to meet the child’s lifelong needs resulting from their disability. This often includes securing financial settlements to pay for:

We tailor the package of compensation to each child’s needs, so that they have the resources to participate in everyday activities and to lead comfortable, fulfilled, lives.

We are one of a small number of solicitors’ firms who can offer Legal Aid for birth injury claims. We also offer other funding options, including 'no win, no fee' agreements.

For a further insight into bringing a claim for CP or birth injury see cases we have acted in and our Guide to Making a Claim.

What is Cerebral Palsy?

The term cerebral palsy (CP) is used to describe conditions affecting movement, coordination and sometimes cognitive impairment and which are typically caused by damage to the brain, either at or around the time of birth, or as a result of a later brain injury.

How is Cerebral Palsy caused?

Brain damage that results in a diagnosis of cerebral palsy can arise in a variety of different ways and, sadly, medical mistakes around the time of birth can be the cause.

Ways in which cerebral palsy may be caused by medical negligence include:

How are Cerebral Palsy and other birth injuries identified?

Often brain injury which occurs during birth results from the baby being deprived of oxygen (sometimes described as hypoxia or asphyxia). Brain damage caused by a lack of oxygen may be referred to as hypoxic ischaemic encephalopathy (HIE).

After birth, signals that something’s wrong may include: poor APGAR, poor tone, seizures (or grunting) in the neonatal period, abnormalities on a brain scan, or failure to meet developmental milestones later on.

How are people affected by Cerebral Palsy and birth injuries such as Erb’s Palsy?

Cerebral palsy and neurological (brain) injury caused at around the time of birth has a very variable presentation.  It can present in terms of physical disability and/or cognitive impairment, including subtle brain injury.

Disability can also be caused in other ways during birth.  For example, Erb’s Palsy is a condition caused by injury to the brachial plexus (nerves that affect movement and sensation in the shoulders and arms) which is sometimes caused when a baby’s neck is stretched in one direction during delivery.  In some cases, this can lead to partial or complete paralysis of the child’s arm.

Children and their families who have been affected by CP or other birth injuries usually need extra support.

Is there a time limit for bringing a claim for Cerebral Palsy or other birth injuries?

In England and Wales, if a child is injured by negligence (including negligence that happened prior to or during their birth), they usually have until their 21st birthday to formally begin a claim at Court.

There are exceptions to this rule.  If someone does not have ‘mental capacity’ to bring a claim as an adult there is usually no time limit.  If they gain mental capacity at some point during adulthood, they will have three years from that point to begin their claim.

In rare cases, it may be possible to argue that the time limit should not be applied for an adult, even if they have mental capacity (although this  is unusual).

It takes time to investigate a claim and, therefore, we advise that you contact us at the earliest opportunity; when all of the evidence is still available and the events are fresh in your mind.

However, we also consider older cases and have previously succeeded in claims for adults who were injured during their birth.

Can I bring a claim on behalf of a child or a family member who is not able to do it themselves?

If a child (or an adult who does not have mental capacity) is injured by negligence, a family member or other trusted person can act as a ‘Litigation Friend’ and bring the claim on their behalf.

Usually claims relating birth injury are brought by one of the child’s parents, who take on the role of ‘Litigation Friend’.

What is the process for bringing a claim?

We start by obtaining evidence including medical records, witness statements and expert evidence to prove that the child’s disabilities were caused by medical negligence.

We also calculate the amount of compensation that can be claimed.  Typically this involves instructing experienced experts to advise on all aspects of your child’s needs, in order to maximise the level of compensation.  We then try to reach a financial settlement with the Defendant (the organisation or individual legally responsible for the negligent care).

In some cases settlement is agreed at an early stage. In other circumstances, it may be necessary to begin Court proceedings.

For further information on this process, read our Guide to Making a Claim.

Can claims be brought in relation to private and NHS care?

Yes. Where the birth or other negligent medical treatment occurred through the NHS, the claim is generally brought against the responsible NHS organisation (such as the Hospital Trust or Primary Care Trust).

Where the treatment was privately funded, the claim is often brought directly against the private hospital, or the private medical practitioner, that provided the treatment.  Hospitals and private practitioners are typically insured or indemnified for negligence claims.

Will the case be decided by the Court?

Probably not.  The vast majority of medical negligence claims are not decided by the Court.  Successful claims are usually resolved through agreement of a settlement either before or during Court proceedings. Occasionally, the Court will decide a case, if it cannot be resolved any other way.

Where the claim is for a child, or for an adult who does not have mental capacity, the Court will be asked to consider and approve the settlement.  This is a safeguard required under the Court rules to ensure that the settlement is in the best interests of the injured person.

What is the benefit of bringing a claim for my child?

If medical negligence was the cause of your child’s disabilities, bringing a claim can secure substantial compensation to meet their needs throughout their lifetime.  Having the funds to buy-in additional support can be transformative.

There are a lot of resources available to empower disabled people and allow them to live life fully.   However, this often costs more than for non-disabled people.  A claim can secure the funding for life enhancing care, specialist equipment, support with education, adapted accommodation and therapies.   It can also provide long-term financial security for someone whose ability to work is affected by their disabilities.

What happens to compensation obtained for a person with cerebral palsy or the effects of birth injury?

If compensation is obtained for a child who is unlikely to have ‘mental capacity’ to manage their financial affairs as an adult, a professional ‘Deputy’ is usually appointed.  The Deputy will manage the compensation, on the child’s behalf, and act in their best interests.  They will liaise with the family and release funds to ensure that the child’s needs are met in an appropriate way.

See Kingsley Napley’s Court of Protection and Deputyship page for further details about the role of a professional Deputy.

If the child is likely to have mental capacity as an adult, then the Court will usually hold the funds until the child is 18.  Prior to that, funds can be released to meet the child’s needs.

We are struggling with the effects of our child’s disabilities.  Will it take a long time before the case is concluded?

Our approach is to seek an admission of liability (i.e. confirmation that negligence occurred and caused injury) as early as possible in the process.

When liability is established, the Defendant usually has to pay part of the compensation immediately.  This allows your child’s needs to begin to be met from the compensation, while the work to quantify the full amount of compensation continues.

Medical records are usually the starting point for our investigation of a claim.  With your permission; we request these records directly from the treatment provider(s).

Our clients sometimes wish to obtain copies of their birth notes and their child’s medical records themselves, before deciding whether to begin a claim.  Please see our Guide to Accessing Medical Records for further information on how to request records.

Other organisations and resources that may help

Let us take it from here 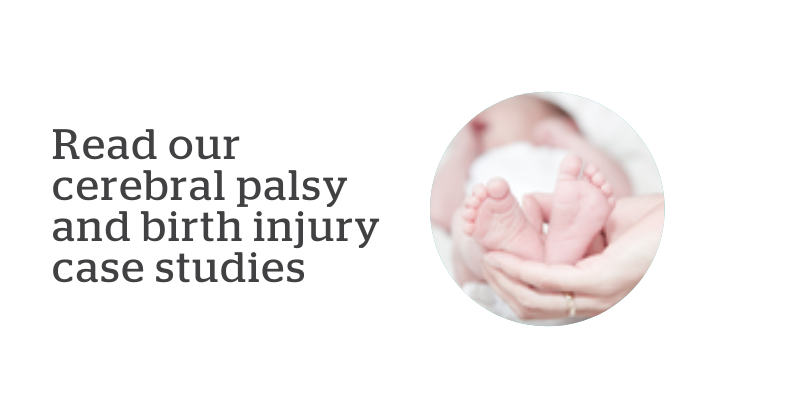 Can I transfer a Medical Negligence or Personal Injury case to Kingsley Napley?

How to fund a Medical Negligence or Personal Injury claim?

Use these FAQs to find out more about bringing a claim and the way in which we can support you and your loved ones through the process.

We have decades of experience in dealing with complex clinical negligence claims and supporting clients through this difficult time.

Let us take it from here