SRA and the regulation of your personal life

The new scheme heralds a sharper focus by the SRA on declaring and upholding proper standards in the private lives of those within its regulatory reach.

This oft cited passage from Lord Bingham in the case of Bolton and the Law Society,[1] remains as true today as it did when it was uttered almost 25 years ago. All the signals coming from the SRA in the slipstream of the new Standards and Regulations[2] (‘StaRs’), are that all those captured by these provisions need to be more aware than ever of how they are behaving outside of their professional practice.

The jurisprudence on the principle of the permissibility of a regulator, such as the SRA, being entitled to bring regulatory action in relation to your conduct, wherever that may take place, is well established: a professional regulator is permitted to set standards that their members must abide by, both in their professional, as well as in their personal, lives. For the SRA, this power to make appropriate rules is set out in the Solicitors Act 1974, with s.31 enabling it to make rules for "regulating in respect of any matter, the professional practice, conduct, fitness to practise and discipline of solicitors". The Legal Services Act 2007 also sets out the requirements in relation to approved regulators discharging their regulatory functions,[3] namely in a way which is compatible with the regulatory objectives[4] and that has regard to  the Principles of Better Regulation e.g. only taking action which is transparent, proportionate and targeted only at cases where action is necessary.  This applies to the SRA in terms of the standards it sets and expects those it regulates to meet, whether in practice or outside of practice.

A recent judicial review challenge to the General Pharmaceutical Council’s (GPhC’s) proposed new standards (R (Pitt and Tyas) v General Pharmaceutical Council [2017] EWHC 809 (Admin)) saw the court head off any suggestion that it was ultra vires for a regulator to set standards that sought to constrain the conduct of members in their private lives.

The more vexed question is not the permissibility per se of this regulatory reach, but how far it can lawfully and reasonably extend. Cases of this kind tend to fall into two categories: conduct which is clearly of interest to the regulator as being indicative of a ‘risk to the practice of law’, or is such that the reputation of the profession will be called into question if no action were taken. Conduct that is criminal or morally dubious, so as to call into question the integrity of the individual concerned, are obvious examples. The more challenging cases are those where the conduct itself is not expressly prohibited by operation of law (or otherwise objectively and obviously unacceptable), but may otherwise be distasteful or unpleasant to many (one can think of many examples…). For the regulators and the courts, a balance must be struck as to when to take enforcement action in these cases and the extent of the permissible reach into personal life becomes a fact-specific, balancing exercise. Decisions in these ‘grey area’ cases are heavily coloured by the social norms of the time. Contrast for example, the case of Royal College of Veterinary Surgeons (Respondent) v Samuel (Appellant) [2014] UKPC 13 in which the Privy Council (PC) ruled that the convictions (for, inter alia, theft and common assault) of Mr Samuel were not matters which affected his fitness to practise (having occurred in his personal life in the context of a neighbour dispute where he had been racially abused), with the more recent case of solicitor, Mark Lewis (December 2018), who was fined by the Solicitors Disciplinary Tribunal for responding to a Tweet in an inappropriate manner, despite he himself having been the target of discrimination and harassment. One can begin to see the intricate consideration that needs to be applied when deciding if matters in a professional’s personal life (that don’t pose an obvious risk to the practice of law) can properly be said to affect their fitness to practise.

Returning to the SRA’s new scheme and how it will apply to those it regulates. There are several indicators that irresistibly lead to the conclusion that there will be, in the very near future, a greater focus on the conduct of professionals away from the office, where the context properly permits.

All seven Principles are all pervasive

First, all of the seven ethical Principles (see here for more about the new pared down set of Principles) will now apply to the conduct of lawyers as well as those non-solicitor employees working in SRA regulated entities,[5] both inside and outside of professional practice. Hitherto, only the current Principle 2 (acting with integrity) and Principle 6 (behaving in a way that maintains the trust the public places in you and in the provision of legal services) are used by the SRA to hold individuals to account for conduct outside of practice.

The new ethical standards are all pervasive and action will be taken for any serious breach of them, whether the relevant conduct directly concerns clients, or occurs on holiday,[6] at the golf club or in a nightclub. The clarity around the application of the Principles is a marked ‘improvement’ from the unclear and rather patchy application of the Principles in the current 2011 Handbook.

Reading between the lines of the Enforcement Strategy

Second, the clear direction of travel in the Enforcement Strategy and in the associated Enforcement in Practice topic guides, is towards the SRA playing an increasingly active role in enforcing breaches of the new principles in the private lives of those it regulates. The importance of the Enforcement Strategy for firms and individuals, in helping to assess what conduct the SRA is going to be interested in, cannot be overstated.

The SRA has to date published five topic guides to accompany the Enforcement Strategy, three of which relate to the approach that the SRA will take to (mis)conduct occurring in the private lives of those it regulates. The new topic guides cover the use of social media and offensive communications, the approach to convictions for driving with excess alcohol and to criminal offences concerning conduct unrelated to professional practice. Whilst obviously an attempt at clarifying the blurred line separating that which is purely personal with professional regulatory responsibilities, these guides suggest a more active interest by  the SRA in matters unrelated to professional practice which are likely to engage certain Principles such as integrity and upholding the confidence and trust of the public. Indeed the SRA make plain that

"the closer any behaviour is to professional activities, or a reflection of how a solicitor might behave in a professional context, the more seriously [they] are likely to view it."

This direction of travel has been mirrored by the Bar Standards Board who recently published their guide to social media use, warning barristers of the regulatory consequences of misusing social media.

Finally in this regard, (personal) character remains centre stage in the SRA’s application process as to the decision of suitability. The conduct of undergraduate and law students has always been under the watchful eye of the SRA, even before they seek to enter the profession, but hitherto there has been no process to assist applicants to know how their early misdemeanours may affect their application. To assist applicants with blotted antecedent copybooks, the SRA has introduced an early assessment mechanism (SRA Authorisation of Individuals Regulations, rule 5.2) that allows prospective applicants to apply for any early assessment of their character and suitability. Whilst the SRA is not bound, in any subsequent application for admission, by any decision it makes in these early assessments, doubtless the outcomes will be a useful indicator to some and enable early decisions about alternative career paths if admission is likely to be refused.

There is also now a clearer obligation (post admission) to advise the SRA about anything that goes to the heart of your character and suitability (rule 6.5), in addition to the notification requirements under the Firm and Individual Codes.

What advice can we give…

The SRA has clearly stated that its primary interest, in so far as enforcement is concerned, is conduct which brings with it a direct risk to the public or to the public interest. It has committed to the publication of guides, FAQs and case studies to bring clarity where needed; reading these, alongside the Enforcement Strategy will provide a strong indication of whether your (personal) (mis)conduct will be of interest to the SRA. The SRA will shortly be publishing a guide to the Public Interest which will further guide decisions in this regard.

[5] This is made plain in the introduction to the Principles

[6] See rule 6.1 of the SRA Assessment of Character and Suitability Rules, which provide that you must disclose all matters, wherever they have taken place (including overseas), which are relevant to the SRA's assessment of your character and suitability

Julie Norris is a Partner in the Regulatory department and specialises in advising in the health, professional services, legal and financial fields. 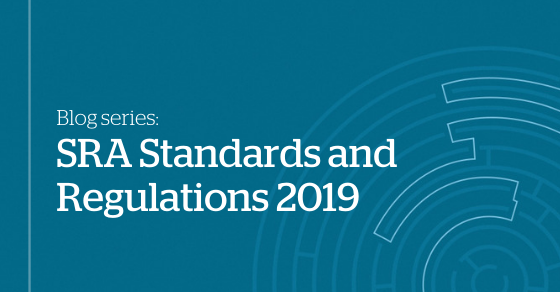 Read our blog series on the new SRA Standards and Regulations