Is the McMafia law working? - Ed Smyth quoted in ICAEW

The Risk and Compliance for Law Firms 2020

Legal update: Restrictive covenants - the risk of getting it wrong

In the case of Prophet plc v Hugget the Court of Appeal decided that, where a restrictive covenant has been poorly drafted, it will not read words into it, even if a literal reading offers the employer no protection at all.

Mr Hugget was a sales manager, responsible for selling two of Prophet’s software products (Pr2 and Pr3) to businesses in the fresh produce industry. In December 2013 Mr Hugget was offered a role at a direct competitor of Prophet (K3) and resigned from his role at Prophet. Relying on a restrictive covenant in Mr Hugget’s employment contract, Prophet made an application to the High Court for an injunction, to preclude Mr Hugget from joining K3 for 12 months.

The non-compete post-termination restriction relied on by Prophet provided that for 12 months after termination the employee shall not work for “any business which is similar to, or competes with, any business of the Company”… Both parties agreed that if read alone, this sentence of the restriction would be unenforceable as an unreasonable restraint of trade.

An additional sentence added to the end of the covenant, provided that the restriction would only operate insofar as restricting the employee from working “in connection with any products in, or on, which he/she was involved whilst employed hereunder”. This sentence meant that if read literally the non-compete restriction would provide Prophet with no protection, as K3 did not and would not be selling Pr2 or Pr3, the only products which in effect Mr Hugget was prevented from selling post-termination.

The High Court held that the clause should not be read literally, as to do so would not give effect to the parties’ intentions, as no competitor would ever be selling Pr2 or Pr3. It therefore added the words “or similar thereto” to the end of the clause and granted the injunction sought.

The Court of Appeal

The Court of Appeal unanimously allowed Mr Hugget’s appeal against the injunction. It held that although a court should generally interpret an ambiguous clause in such a way as to provide a commercially sensible solution, this was not an ambiguous clause: the covenant did not contain an error of drafting but an error of thought. It found that the second sentence was clearly added to the covenant as a proviso with the intention of ensuring that the covenant as a whole was enforceable and not in unreasonable restraint of trade.

This decision means that if an employer does not carefully think through the literal meaning and impact of a restrictive covenant, in terms of the precise role of the individual involved, there is a risk that the entire restriction may have no commercial effect. This serves as an important reminder that employers should carefully consider the intention and drafting of all restrictions and tailor them to individual employees, on a case by case basis. 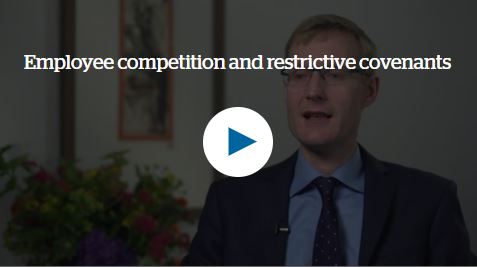