The FRC’s What Makes a Good Audit? report is timely as the audit regulatory landscape readies itself for change

Home Insights Blogs Regulatory Blog The FRC’s What Makes a Good Audit? report is timely as the audit regulatory landscape readies itself for change

The FRC has published a new paper aimed at audit firms and audit stakeholders containing best practice principles concerning how a good audit should be conducted and the elements indicative of a high performing audit practice.

Although the title of the report “What Makes a Good Audit?” suggests its focus concerns what the FRC considers a good audit to look like, the report is split into two sections: key attributes of a good audit;  and key attributes of a high-quality audit practice. This dual focus is explicitly mentioned to recognise the importance of both the audit itself as well as how well an audit practice is run.

Rather than offering a step-by-step prescriptive guide, the report also emphasises the importance for auditors to apply judgement within a “principles-based framework”, reaffirming its stance that audit quality should not be approached as “a rules-based compliance exercise”. In this regard, the principles of good audit practice in the second half of the report encompasses the need for firms to adopt the right culture, behaviours, and mindset when conducting a good audit.

The report sets out the FRC’s views on what a good audit should look like, and breaks down three components that audit firms should consider: risk assessment and planning, execution of the audit, and completion and reporting. 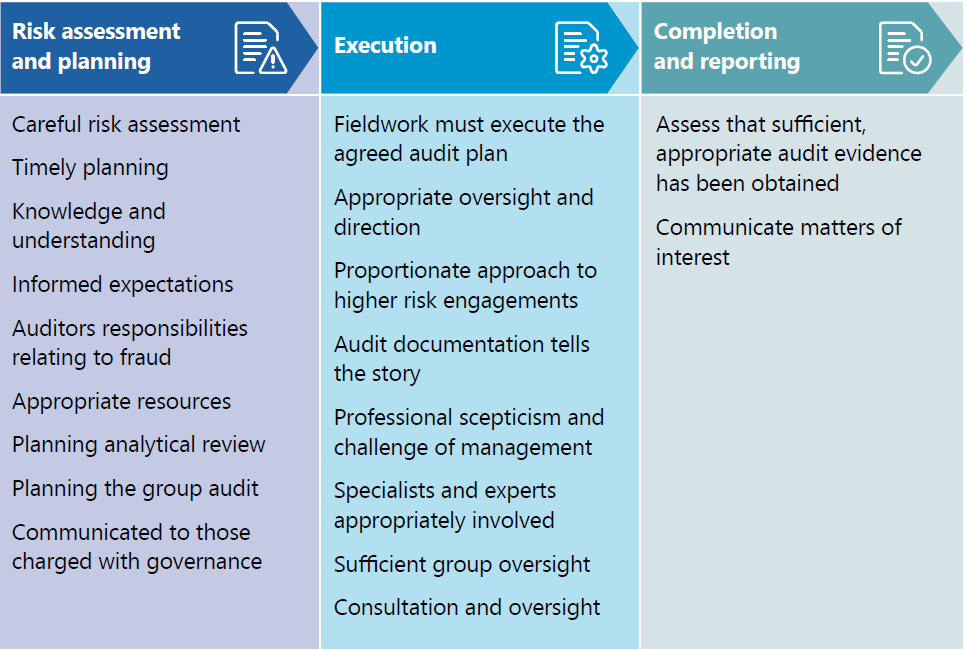 Adopted from the FRC report: What Makes a Good Audit? (Figure 1 on page 7)

The report continues to examine each of these elements, providing a set of guidelines for each along with examples of good practice the FRC has observed during previous audit quality inspections.

Similarly, the report sets out six components it considers make up a good audit practice: assessing firm quality risks, governance and leadership (including culture and mindset), performance monitoring and remediation, quality monitoring, resources (including recruitment and training), and information and communications. The report provides guidance on how each of these elements might be achieved, supported by examples of good practice it has observed. 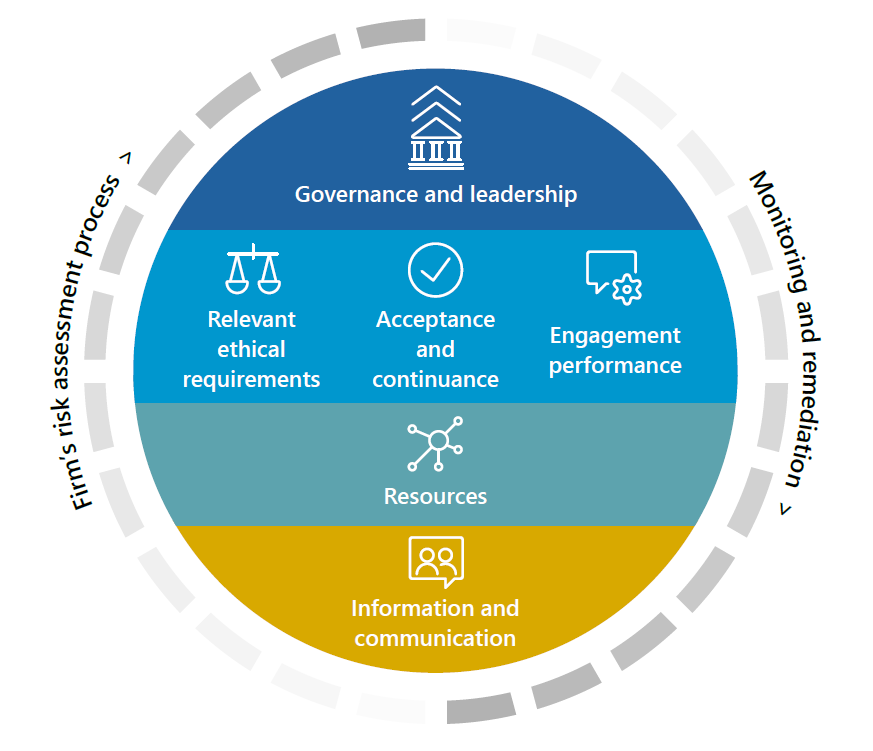 Adopted from the FRC report: What Makes a Good Audit? (Figure 2 on page 21)
We do not intend in this article to summarise the guidance offered, as to do so would dilute the messages communicated. We would instead encourage our clients and readers to consider the full report.

Our key focus here will be to set the report within the context of the changing landscape of audit reform, and consider the potential impact it will have on audit firms and their stakeholders. In general, we welcome the report and the FRC’s engagement with the regulated community on these matters, and propose the guidance it has offered will be useful in several ways. Specifically, we consider the report will offer valuable guidance to three groups of populations operating under the FRC’s (and soon to be ARGA’s) regulatory remit. These are set out below.

The BEIS reforms have grabbed the audit community’s attention over the last 12 months. In recent weeks, media reports have suggested the reforms may diverge from what was originally proposed in the BEIS white paper, consultation for which closed some months ago, in July 2021.

Specifically, several news reports suggest the potential widening of the PIE market may not transpire to the extent that was proposed. If these reports prove correct, a narrower definition of PIEs will be helpful for mid-tier firms as fewer of their current clients will fall under the increased regulatory scrutiny of the FRC’s successor, the Audit, Reporting and Governance Authority (ARGA).

However, it is unlikely, and indeed the news reports suggest, that there will be no expansion of the PIE market at all. What is more likely is that the market will increase but not to the extent that was proposed. This means the impact on mid-tier firms is still likely to be significant for some as their audit practice inadvertently falls under the net of the regulator’s scrutiny.

The FRC’s report on good audit and good audit practice further hints towards this eventuality, suggesting the best practice principles outlined will help to inform these firms as they expand into the PIE market. It is also worth noting that such a move may not be inadvertent and may instead be part of a firm’s planned strategy. Where this is so, the report will no doubt offer useful guidance on what the regulator will expect of them.

From a practical perspective, the report highlights the increased need for mid-tier firms to have appropriate subject matter experts to conduct PIE audits. The report will therefore be useful to consider in terms of strategy planning, by setting out the elements that firms might wish to cross-reference against to identify and resolve potential knowledge gaps within their audit teams.

Another aspect of the BEIS reforms that we are expecting is the introduction of managed shared audits. BEIS was strongly of the view in its white paper on audit reform that such audits would open up the PIE audit market to challenger firms and increase audit quality. In this regard too, the best practice principles will ensure audit quality consistency is maintained in managed shared audits.

Equally, however, the FRC’s report might cause some apprehension to mid-tier firms, either moving and/or expanding into the PIE audit market. It might be all well and good to set out the ‘gold standards’ of what the FRC considers good audit quality and practice to look like, but this has to be paralleled with an openness by the FRC to engage with mid-tier firms along the way, and encourage their learning process to get them to the gold standard it expects from them. This will necessitate the FRC acknowledging that these firms are likely not to have the wealth of resources that their larger firm competitors have, and will require more flexibility at least for a period of time until they establish a firm hold.

While the report acknowledges that much of it is primarily focused on the activities of audit firms, different sections of the report will also be of interest to different stakeholders, including those operating in the local audit market.

In a separate report published last month by the FRC, following its latest major local audit quality inspection, it noted that while the overall quality of the local audits that were inspected was good, the majority (55%) of local government audits were not issued by the extended target date of 30 November 2020. In fact, half of the audits the FRC initially selected for inspection based on risk had to be replaced because they had not been finalised.

As part of its inspection, the FRC engaged with local audit committee chairs and other persons responsible for governance in local authorities. Discussions were noted to focus on the role of the chair, areas of audit risk they focus upon and any concerns over the audit process. Continued engagement can only be a good thing, and the What Makes a Good Audit? report underlines the FRC’s intention to maintain this.

In many cases, audit governance failures in local authorities arise from a convergence of financial and resource pressures, coupled with the challenge of not enough knowledge and guidance in terms of what should be considered in their audits, rather than as a result of any intentional wrongdoing. For those in local authorities charged with audit governance, the report will be useful in what they should look out for in the communication from their auditor in respect of the audit findings.

With ARGA proposed as the new regulator to replace the FRC, it is likely to become the oversight regulator for local audit and governance. We hope it will continue not only to engage with audit committees and those charged with governance in local authorities, but also offer more support, knowledge, and guidance to those people, to help them to identify and address any issues before regulatory intervention becomes necessary.

Aside from audit committees and financial directors operating within the local authority sector, the FRC’s report will also serve as a useful guide for those individuals in the private sector, particularly companies which, following the audit reforms that are yet to be announced, may find themselves redefined as a PIE, and therefore subject to the regulator’s scope.

While we acknowledge that no firm announcement has been made in respect of the outcome of the BEIS white paper on audit reform, the news reports mentioned above suggest some widening of the PIE market will take place, albeit perhaps not to the extent that was initially proposed. The media reports also suggest that the possible regulatory accountability of company directors may not come to pass.

Regardless of this, Financial Directors operating in the PIE sector will nonetheless have positioned audit quality high up in their agenda for several obvious reasons, including the assurance of governance and stability, as well as reputation management. As such, the FRC’s guidance will be helpful for them to understand more about what their auditors should be considering, and what they should expect to see from their auditor.

The report is timely considering the landscape of audit practice remains in the midst of significant regulatory reform. Until the BEIS formally announce the details of the final reforms, we along with the business community and their audit firms, await the full impact these might have. We have consistently voiced our support for greater engagement from the FRC in the form of practical knowledge and guidance to help audit firms, particularly those operating in the mid-tier market, and financial directors charged with audit governance in their respective companies. This report goes some way in raising this knowledge and understanding.

However, our view remains that along with the guidance, which sets out what the FRC considers to be the ‘gold standard’ of audit quality and practice, this learning must be supported by continued engagement by the FRC particularly for mid-tier firms  which may not have the wealth of resources that their larger competitors have. If the BEIS reforms are to break down the commercial barriers of the big audit firms and open up the audit market to smaller firms as intended, then there must be some flexibility by the FRC in terms of how it responds to lesser experienced firms and its evaluation of the best practice principles it has set out.

If you have any questions or concerns about the content covered in this blog, please contact a member of the Regulatory team.

Julie Matheson is a partner in the Regulatory Team. Her expertise lies in advising professionals and professional services firms, particularly in the accountancy and built environment sector, on regulatory compliance, investigations and enforcement proceedings.

Lucinda Soon is a professional support lawyer in the Regulatory team, and is responsible for knowledge management and practice development. She has previously advised individuals and organisations in the legal and accountancy sectors on authorisations, compliance, ethics, and regulatory policy, and formerly worked as a PSL in the General Counsel team at the Solicitors Regulation Authority. Lucinda is a keen advocate for mental health and well-being at work, and is currently pursuing a PhD in Organisational Psychology, where her research focuses on well-being in legal practice. She is also a Trustee of LawCare.

The FCA – Transformation to Assertive Supervision