Webinar: Costs in private prosecutions – an update for practitioners

Raising investment for startups: what legal documents would you expect to see?

Has Brexit undermined the UK’s ability to extradite its fugitives?

Whilst the uncertainty over Brexit and the painfully slow progress of political talks continues, the Supreme Court of Ireland has taken matters into its own hands and decided that the Irish state cannot surrender an individual who is the subject of an European Arrest Warrant (EAW) to the UK because of the risk that his rights as an EU citizen will not be enforceable in the UK post-Brexit.

This has raised concerns that other countries could follow suit and leave the UK unable to rely on the EAW system whilst the terms of Brexit are being agreed.

Mr O’Connor is a company director who was convicted of two tax fraud offences in the UK on 26 October 2006. He failed to answer his bail on 29 January 2007 and was sentenced to 4 and a half years in prison. He had fled to Ireland and an EAW was issued by the UK on 13 June 2011, endorsed by the High Court in Dublin on 22 June 2011, and executed on 27 March 2012 when Mr O’Connor was arrested by the Irish police.

Since his arrest, Mr O’Connor has fought his extradition through the Irish courts. His initial ground of appeal was that Ireland had breached the requirements of EU law through its failure to make provision for a ‘statutory legal aid scheme’ for those subject to EAWs. This argument was dismissed by the High Court ([2014] IEHC 640) and the decision was upheld by the Court of Appeal ([2015] IECA 227) and, subsequently, the Supreme Court [2017] IESC 21.

They say every cloud has a silver lining and out of the gloom of the Brexit cloud has shone a ray of opportunity for Mr O’Connor. He was back in the High Court in July 2017 arguing that the UK’s decision to leave the EU means, as a matter of European law, that an EAW can no longer be deployed in respect of requests from the UK (see para 5.1 [2018] IESC 3). The High Court rejected this argument and Mr O’Connor applied to the Supreme Court for leave to appeal. In a surprising judgment delivered on 1 February 2018, the Supreme Court granted leave to appeal and directed that it will make an Article 267 TFEU reference to the CJEU for a question of EU law to be determined.

The first line of the judgment of the Court referred to the ‘significant complications arising in a whole range of areas as a result of Brexit’. The Court agreed that there was a risk that Mr O’Connor would be imprisoned in the UK after 29 March 2019 which is, according to the notice given by the UK under Article 50, the day that the UK will cease to be a member of the EU (‘Brexit day’). Mr O’Connor’s rights as an EU citizen cannot, at present, be guaranteed past this date. Mr O’Connor also argued that the EAW system is based on the assumption that a person surrendered will remain subject to European law. The precise ‘European law rights’ he was worried about were not clearly defined but were broadly referred to as his rights under the EU treaties, the Charter and the 2002 Council Framework Decision on the EAW.

The Supreme Court grappled with these broad theoretical arguments and seemed in particular to be concerned about the likelihood that after Brexit day the UK courts will no longer be able to make references to the CJEU and so by surrendering Mr O’Connor there would be no guarantee that the question of the scope of his rights as an EU citizen could be decided by any court outside the UK. The Supreme Court decided, therefore, to make a reference now in the hope of gaining some clarity not just for Mr O’Connor but also for the 20 other individuals who have also made similar appeals in Ireland

Concerns for the future?

As we have reported in a recent blog,  the UK sees the EAW system as an invaluable tool for police and security interests and is likely to be keen to try and negotiate a deal which replicates the current system as closely as possible. However, until the UK government gets on and agrees the terms of its departure from the EU it appears that the UK’s ability to rely on the EAWs it issues for requested persons across Europe is no longer guaranteed.

Should you have any questions about the issues covered in this blog, please contact a member of our Public Law and Criminal Law teams.

We regularly blog about a range of legal issues, including criminal and public law matters. Follow our Criminal Law and Public Law blogs for the latest commentary. 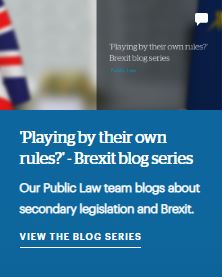 The silent threat of unconscious race discrimination in the workplace

The first NHS prescription for a child’s cannabis medicine - is the case of Billy Caldwell an outlier or the start of a trend?

Extradition: The Divisional Court has refused to extradite alleged génocidaires to Rwanda--will a domestic prosecution follow?

Theresa May wants EU criminals out; following Brexit it may become more difficult to remove them

Global Laundromat and the proceeds of crime - what makes property “criminal” in extradition cases?

Justice and Security - A series on the EU, the UK, and the outlook post-Brexit: blog #3 - Looking at the EAW

‘A very important time…in the security landscape of Europe’: director of Europol speaks to the Home Affairs Committee about the organisation’s future