Brexit and domicile: EU nationals - exercise your choice before the government does it for you

Home Insights Blogs Private Client Law Blog Brexit and domicile: EU nationals - exercise your choice before the government does it for you

For most non-UK nationals resident in the UK, having to grapple with the English concept of domicile may not be top of their priorities. But for many, it should be.

What’s domicile and why is it important?

Domicile is the crucial test to see whether an English Will, together with the full freedom of testamentary disposition which is permitted here, would be effective for you or not.

Domicile is distinct from other better understood or intuitive pan-European connecting factor tests, such as residence, habitual residence, nationality and citizenship. Domicile separates into two strands: the main ‘general law’ domicile concept and the ‘deemed’ domicile tax concept. The ‘general law test’ can be summarised as the one territory with which someone is most permanently or indefinitely connected, or in other words where that person’s ‘heart’ lies. The starting point is to establish a person’s domicile of origin; this will be determined by the domiciles of that person’s parents at birth – influenced by the father’s domicile at that point if the parents were married and the mother’s if not (it’s rather old-fashioned).

Once an adult, you can swap a domicile of origin for a domicile of choice. This is tested by weighing up the factors that connect a person with the various territories which might have a claim. Although every person’s circumstances will be unique, case law has shown these factors to be influential: location of assets (particularly real estate), family ties, other connecting factors (e.g. residence, nationality etc), whether the migration to England was voluntary or not (e.g. political problems in the country of origin causing the departure), location of grave/cremation plot and testamentary planning including express statements about the individual’s own interpretation of their domicile.

Deemed domicile is only relevant for tax – it does not have an impact on succession law i.e. how effective an English Will would be.

Unlike nationality, you can only ever have one general law domicile at any particular time.

A picture tells the Brexit herds

The diagram below assists in showing the trajectory of an average French* national arriving in London. On arrival, all other things being equal, they will be merely resident i.e. in the red zone. They will have retained their French domicile of origin for the time being. They will have the option of choosing the remittance basis of UK taxation; essentially paying UK tax only on their UK assets, keeping their non-UK assets outside of the UK tax with careful segregation. This is free for the first 7 years, then a £30,000 annual charge for selecting this taxing basis is payable and after 12 years the annual charge rises to £60,000.

After being a UK  resident for 15** consecutive UK tax years (running from 6 April to the following 5 April), they automatically become ‘deemed domiciled’ even if nothing else has changed – they have moved into the blue zone. They can no longer select the remittance basis and now have to pay UK tax on their worldwide assets. Their worldwide assets are also now subject to UK inheritance tax (IHT) - previously UK IHT would have been limited to their UK situs assets (ie where the assets are treated as being located for tax purposes). However, it is not automatically true that the French deemed domiciled person has become English general law domiciled (i.e. the grey zone). Someone can spend most of their life UK deemed domiciled, but remain French domiciled under English general law.

Equally, someone with enough intent to remain permanently or indefinitely in England can acquire a new domicile of choice very soon after arrival in England i.e. join the grey zone without spending long in the red zone and bypass the deemed domicile blue zone altogether– do note that once someone becomes general law domiciled, this has the same effect for UK tax as them being deemed domiciled even if they have spent less than 15 consecutive tax years in the UK.

Should our French national leave the UK, the diagram shows that a deemed domicile tax ‘shadow’ hangs over them. This remains in place until they have been non UK resident for at least 6 out of 20 UK tax years for income tax and CGT purposes. For IHT purposes the deemed domiciled ‘shadow’ lasts a shorter 4 consecutive UK tax years of non-residence.  Theoretically it is possible for our French national to be non UK resident but still retain a general law English domicile of choice, but in practice this would be rare – more likely their French domicile of origin revives when they leave, possibly to be replaced by a second domicile of choice when they establish themselves in a third country in due course. 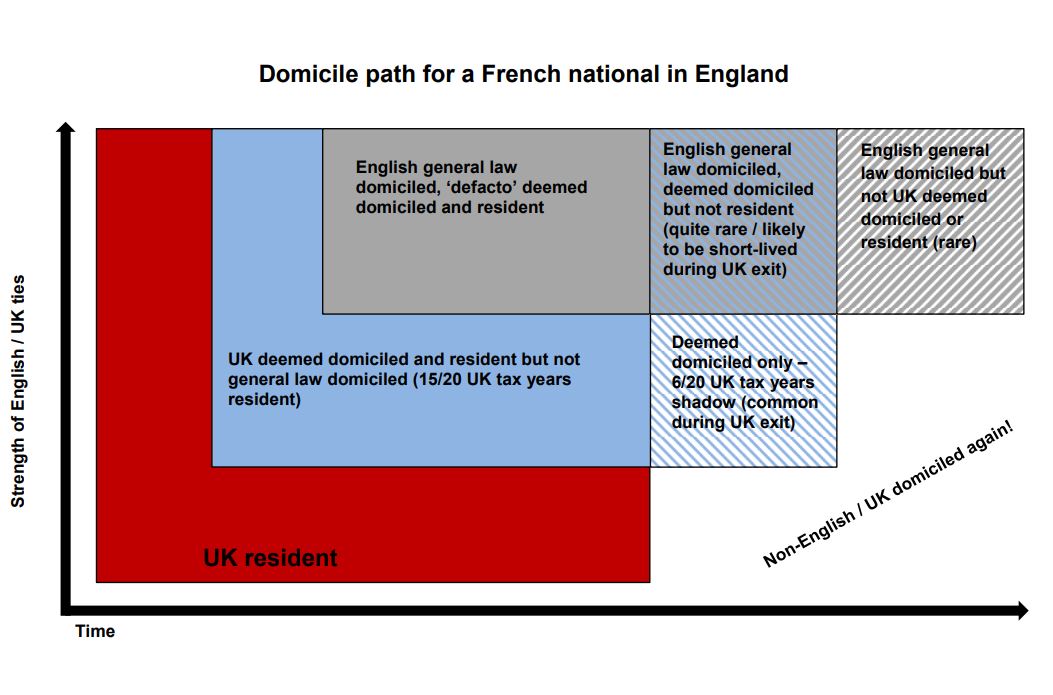 *the same analysis same would apply for any other average non UK EU person resident in England.

**because UK tax residence can arise from as little as a single day's presence in a UK tax year, theoretically one can become UK deemed domiciled in just over 13 (i.e. not 15) years.

What’s the relevance of Brexit?

All very interesting, but why bring up Brexit? Well, it’s about the EU person’s need to react to the British government manipulating and maybe even ransoming rights (which are also domicile of ‘choice’ factors) which the EU person previously took for granted or never considered. In particular:

(i) UK immigration status and the connected need to consider acquiring protective UK nationality; an EU person resident in England may feel forced into taking these steps for economic or family reasons, which would objectively tie them more closely to England and could tip them towards acquiring an English domicile of choice.

(ii) However, if the new English rights acquired at (i) were acquired under sufferance, is the better view that there was little ‘choice’ involved here and so their domicile of origin actually remains intact?

What I am trying to demonstrate in this blog is that volatile political factors outside an EU person’s control are impacting on their English succession and taxation status.

Instead, to achieve a measure of certainty on these important questions, now is their moment to ‘take back control’. In practice this would involve:

(a) a review of their current domicile position and  their short, medium and long term objectives;

(b) matching these to appropriate Wills, property and tax arrangements.

Joseph Austin has many years of experience of preparing English wills tailored to your specific needs where there are EU assets and connections. Although he cannot advise on other EU law or tax he works closely with trusted EU lawyers and other professionals (such as accountants) to make sure your planning is seamless and consistent between the jurisdictions concerned.

Our Private Client team also specialise in deceased estates with an English connection containing EU property. As for wills, we co-ordinate closely with EU lawyers to give joined up advice for legal successors and beneficiaries / heirs.

Domicile path for a French national

View the Domicile path for a French national

Many of our clients have complex business structures, high value real estate or other assets which necessitates careful planning.

Brexit: whisper it quietly, but I think we might actually be back in business...

#Brexit update: an early Christmas present for those dreaming of single market membership?

Keeping an eye on the ‘ex’: the EU Gothenburg Summit and the future of UK employment law