Tier 2 Restricted Certificates of Sponsorship allocations close to the limit

The government has retained the annual cap for Tier 2 Restricted Certificates of Sponsorship at 20,700 for the current year, 6 April 2015 – 5 April 2016. The cap was reached in March 2015 and if it was not for the fact that the monthly quota for April was increased to 2,550, the cap would have been reached in April. For the month of May a total of 2,277 Restricted Certificates of Sponsorship were allocated, leaving only 8 remaining to be rolled over to the already reduced allowance for June; only 1,658 will be available for June. It is very likely that the cap will be reached for June which will mean some Sponsors will not be granted their Restricted certificates.

For the first time the points based allocation system is likely to be utilised whereby those scoring a higher number of points are more likely to be successful.

The points range from a minimum of 32 to a maximum of 105  as per the table below:

If Sponsors miss out on an allocation where the cap has been reached, then they will need to submit a fresh application the following month. The CBI is currently lobbying the government on this issue and it will be important for Sponsors to make their voice heard if their business is being damaged by an inability to recruit skilled migrants from overseas. 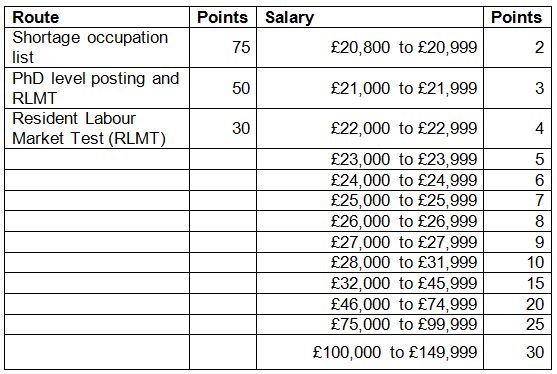 The Migration Advisory Committee has been asked by the government to advise on significantly reducing the level of economic migration from outside the EU and this will be an opportunity for Sponsors to make their views known.

We will write to you again with details of the consultation once this has been published.