The Home Office has announced today that it will change the operation of the Tier 2 (General) limit to maximise the number of places which can be allocated each month, within the overall annual limit of 20,700.

If the limit is oversubscribed, as it has been in each of the past three months, applications for Restricted Certificates of Sponsorship (RCoS) are prioritised according to a points table.  The available RCoS are allocated based on the highest points scored.  Points are awarded based on whether the job is in a shortage occupation, a PhD-level occupation, and the salary on offer.

Some of the points bands in the current table are too wide; for example, jobs paying £32,000 to £45,999.99 all score 15 points for salary.  Kingsley Napley and other immigration firms raised this issue with the Home Office at a meeting held at our offices in June, following the alarmingly high refusal rate of RCoS from the June allocation. We suggested narrowing the salary bands to increase the chance of those applicants earning lower salaries obtaining an RCoS. We also raised the issue with the Migration Advisory Committee who have taken the comments on board and worked with the Home Office to achieve this change. The Home Office will now increase the number of salary bands in the points table and the revised table is shown below. 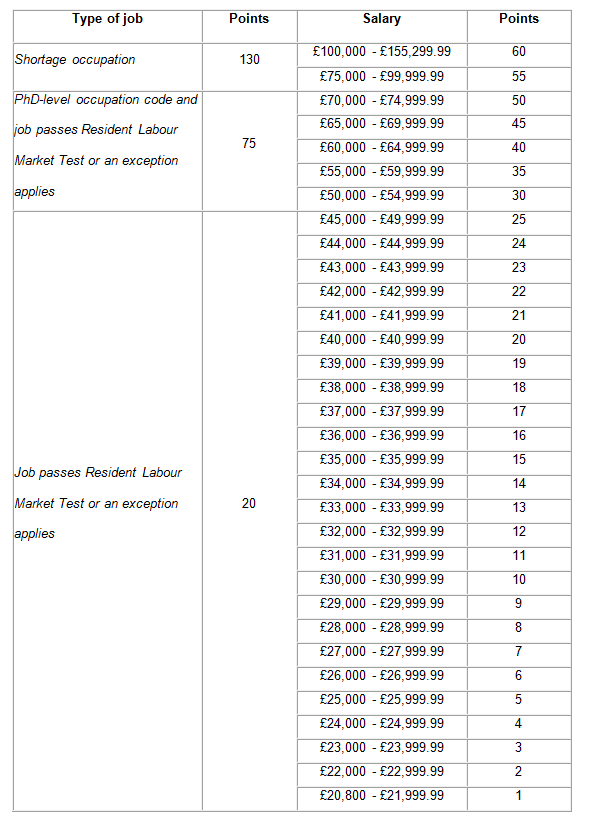 This change would mean, for example, that in June the Home Office would have been able to allocate RCoS to all non-shortage occupations with a salary of £34,000 or more, rather than £46,000 using the existing table.  The prioritisation given to shortage occupations and PhD-level occupations is unchanged.

The new table is provisional until the necessary changes to the Immigration Rules have been laid before Parliament, but the Home Office intends to apply the new bands to the RCoS allocation meeting on 12 October, applications for which will open on 6 September.  The 11 September allocation meeting will continue to use the existing points table.

The Home Office also intends to make one further change relating to the limit.  Under the existing rules, RCoS must be assigned by Sponsors within three months or they will expire.  The change will enable the Home Office to return any such unused places to the limit, increasing the number of RCoS available. The Home Office did this informally for the August allocation by writing to Sponsors to request the return of unused certificates, which accounted for an additional 648 certificates. This enabled those applicants earning a salary of £24,000 or above to qualify for an RCoS from the August allocation. The re-allocation process will now be formalised and any RCoS unallocated after three months will be automatically returned to the pot.

This is very welcome news indeed and will be of significant benefit to those Sponsors recruiting recent graduates from overseas.

For further information on the issues raised in this blog post please contact a member of the immigration team.

Crackdown on skilled migrants – a step too far?