Government publishes its latest Statement of Changes to the Immigration Rules

The government published its latest Statement of Changes to the Immigration Rules today and contrary to expectations, none of the widely anticipated new measures have been introduced, following the recommendations of the Migration Advisory Committee (MAC) in its Tier 2 Review report in January.

It is likely that there has not been sufficient time for the government to consider the MAC’s recommendations, given that attention is currently focussed on the upcoming EU Referendum. This is very good news for all Tier 2 Sponsors as the status quo is being maintained for the time being.

There are some minor changes to Tiers 2 and 5 as follows:

One positive change announced is in relation to the annual limit which applies to the Tier 2 (General) restricted category. To cater for high demand over the summer months, the allocations have been revised to better reflect seasonal demand for places across the year. The overall size of the limit (20,700 places per year) however, remains unchanged. This may alleviate the problems encountered last summer when the annual limits cap was breached in June 2015, which meant that a number of recent graduates and other lower paid applicants were not able to gain sponsorship.

Provisional monthly allocations under the Tier 2 (General) limit are set out below: 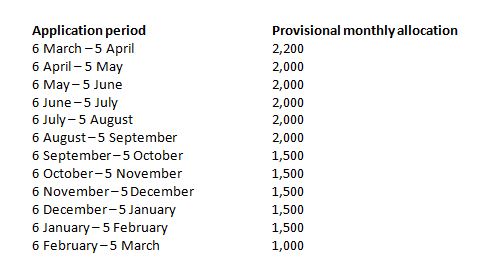 As in previous years, an annual uplift in line with wage inflation is being applied to the earnings threshold for Tier 2 (General) and Tier 2 (Sportsperson) settlement applications. The uplifted threshold will apply to settlement applications made from 6 April 2021.
The Government intends to review other Tier 2 salary requirements as part of its response to the review of Tier 2 published by the MAC on 19 January 2016.

The maintenance requirements under all the Tier 5 (Temporary Worker) routes are being amended to clarify that by a sponsor certifying maintenance they are confirming the applicant will not claim public funds during their period of leave.

Should you have any questions about the issues raised in this blog post please contact Nicolas Rollason or a member of our immigration team.