IWD: I Am Woman, Hear Me Roar.

Home Insights Blogs Giving Something Back IWD: I Am Woman, Hear Me Roar.

As Maeve Keenan wrote about in her IWD Blog on Wednesday on 22 February 2017, around 100,000 people descended on the streets of central London to partake in the Women’s March on London, as they did in towns and cities across the UK and the world.

These marches were organised out of a frustration felt by many in response to sexist, discriminatory and divisive comments made by President Trump during his election campaign and which have so far shown no obvious signs of being reined in, as the reality of a Trump Administration unfolds.

The marches brought people together who wanted to make their views, their beliefs and their voices heard across a range of issues from climate change, to LGBTQ rights, to Brexit. The fierce anti-Trump sentiment was palpable amongst the waves of my fellow marchers, but I personally wasn’t on an anti-Trump march, I was on a pro-women’s rights march.

I attended because my view is that if the most powerful man in world cannot be seen to be taking women’s rights seriously and is seen to be getting away with casually sexist rhetoric and conduct then I need to add my voice to the millions of others’ who oppose this behaviour, in the hope that he will hear our roar and set an example in the pursuance of real gender equality, a goal towards which we sadly still have a fair way to go.

The feeling that the momentum for equality and women’s rights has been stalling was neatly summed up in the words of one particular sign which caught my eye on the march: “I can’t believe we’re still protesting this s**t”. But, we are. Which is why International Women’s Day is still important and still relevant and if anything, amidst the stress and confusion of an unpredictable political landscape, feels more important than ever this year.

Thankfully, the messages of those who marched on 21 January were intelligent, clear, creative and often amusing, and with that in mind, here is a roundup of a few stand-out signs from the women’s marches in London and Manchester.

Thank you to my friends and colleagues for contributing your snaps from the day. Feel free to tweet any additional pics to @kingsleynapley and support International Women’s Day with us.

Kingsley Napley are proud to support the #BeBoldForChange campaign and are publishing a series of blogs to promote discussion around gender and the continued relevance of International Women’s Day. 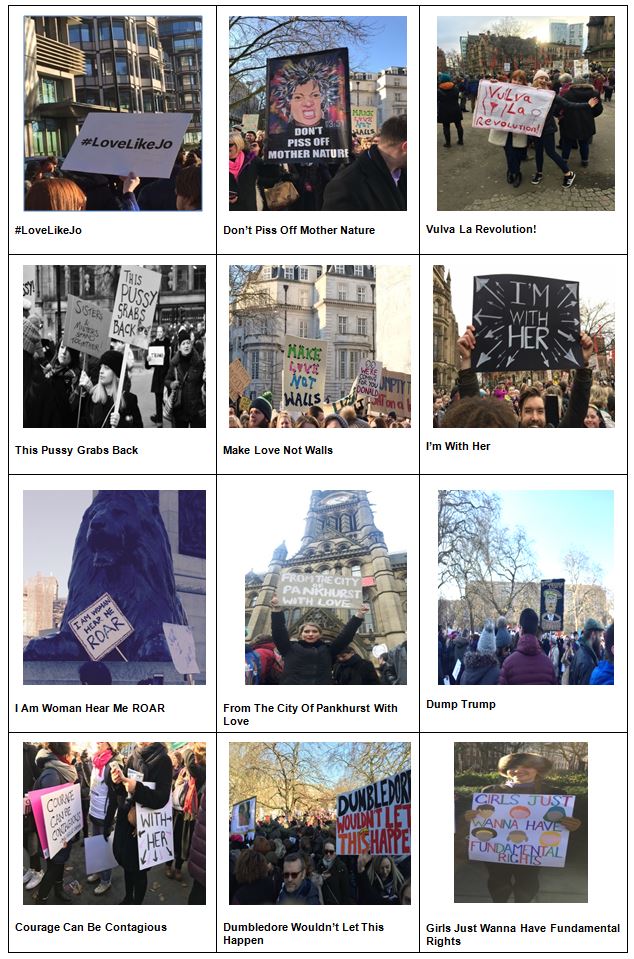