IWD: ‘Come on, give us a smile’ – the girls and construction mix

Home Insights Blogs Giving Something Back IWD: ‘Come on, give us a smile’ – the girls and construction mix

My resting face, and in particular my focused face, is stern.  ‘Come on, give us a smile’.  This is what I heard from a man whom I did not know, whilst checking my e-mails following a major construction legal industry networking event earlier this month.  Whilst ignoring the demand, I instantly started fuming inside.  I thought a lot about this minor incident since.

Does my instinctive reaction make me a radical feminist?  Massively stereotyping, would I have found the remark, if not acceptable, less surprising had I heard it on a construction site, rather than at a law professionals’ event?  I was not sure, but at least I had an opening for this blog.

I am a construction lawyer working for a firm with a predominantly female workforce.  In anticipation of 8 March 2017, some of us thought that even if we live and work in 2017 London, we still need to join forces and raise awareness about inequalities that women still face in this day and age.  Whilst I have not been discriminated because of my gender (too often), the reality is that my position, as well as that of many women around the City would be viewed as privileged by many women around the world.  When I volunteered to write a blog relevant for International Women’s Day, as a construction lawyer I naturally chose the topic of ‘women in construction’.

Throughout my career I have only very occasionally come across women construction professionals (with the exception maybe of lawyers and architects), but have not realised that the construction world is a world that has failed maybe more than any other to keep up with the times and it is a classic example of gender disparity and inequality.

The lack of gender diversity in construction is a hot topic at the moment and I was determined to join the ranks of those who have already written on the subject and raise awareness (without any claim that I have a solution to the problem).  As I like to be informed before sharing my views on something, I started my research by Google-ing: ‘engineer’ and  ‘construction worker’.  The first page of the Google images results has this to show:

If your eyesight is good enough, you may have spotted the five female ‘engineers’ and the Lego construction worker.

Continuing with the same line of, what some may think is anecdotal evidence, as for many of us, Lego represented the first interaction with construction and first attempt at building, I checked what they have in store for girls and boys, and this is what Google came up with: 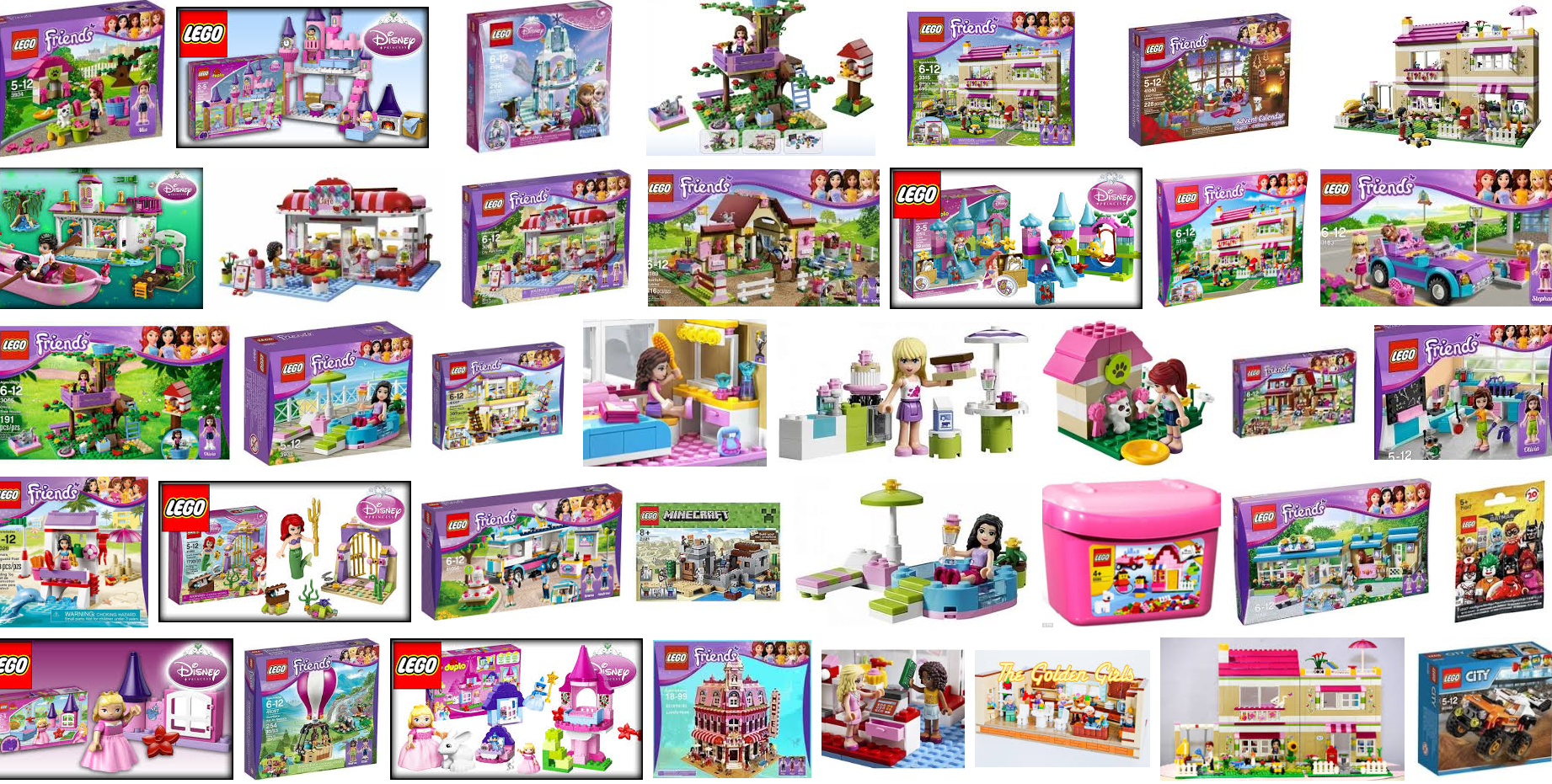 So girls are encouraged to build a lot of castles (no bad thing, although I am not sure about the predominant pink), playgrounds, the obvious kitchen, a cashier’s desk and I may have spotted one purple car and a tree house.  Nothing wrong with any of this. Just as there is nothing wrong with boys’ products including fortresses, helicopters, spaceships, trucks, boats, aeroplanes and police cars.  Are we teaching girls to keep the world grounded and boys to keep it moving?  I don’t know, but did spot in the left hand corner the rebellious girl holding a multi-coloured contraption that is neither a jewellery box nor a cupcake.  She is the exception.

Just like women in the construction industry continue to be the exception. For those of you who want to see another example of toys staying true to gender stereotypes I have included a link at the end of this piece, published last month by the Guardian[1], discussing the new “Engineering Barbie,” a doll produced to encourage girls to enter the engineering field or at least that is how it has been marketed.

Many, if not most people, would find a man quipping ‘Go on, give us a smile’, funny or endearing. Other people (myself obviously included) find it off-putting and condescending.  I think this innocent comment, is a good metaphor of the position that many women find themselves in, should they decide to venture down a construction career path.  Had I been at the start of my career, I would have probably found it isolating and intimidating.

Are the toys we are buying for our daughters influencing their career decisions later on?  Are the comments from men around them putting them off following a career that is traditionally male-dominated?  What would take for more girls to see the attraction in swapping the elegant suit for a hard hat and heavy duty boots?

Moving on to more serious research, Dr. Shelley Roff, who teaches architecture and urbanism at the University of Texas, noted in a conference in 2011 that she was of the impression that historically, women made virtually no contribution in construction, architecture and related trades when reading historical literature on this.[2]

However the fact that women weren’t featured in literature is by no means evidence that this was the case!  Many of our readers will know about Waterloo Bridge (the Ladies’ Bridge) that was built almost exclusively by women although we have no photographic evidence of this. Dr Roff noted that women were in fact working on construction sites and building trades in the earlier historical period but it was regarded as socially unacceptable to record this labour as work. Society regarded a woman’s primary duty was to her family and that she was incapable of heavy labour.

Today only 12% of women make up the construction industry in the UK with 1% working on site; with statistics as low as these one can’t help but wonder whether this conception remains in the construction world today.

A survey carried out over 10 years ago on London’s Oxford Street by Building[1], UK’s magazine for construction professionals, where fifty women were asked whether they would consider a career in construction. Thirty six of those women said no. Some words used to describe their views of the industry were “macho”, “dangerous” and “hard work.” The picture today is no different. The negative image of the construction industry itself needs to be challenged if we are to encourage our younger generation of females to consider taking up roles in this field of work. We should educate them about the professionals who make up the industry, from architects to engineers and tackle public misconception that construction consists of only manual labour.

Challenging the image is not enough if the industry itself does little to accept women within their ranks.  Some key factors that various construction organisations are considering include:

When researching this issue I came across a lot of content, a lot of which took me by surprise. But to avoid writing a lengthier piece I have digested what I have learnt about the challenges faced by women today, in this industry:

a)  51% of women have been treated worse as a result of their gender
b)There is a lack of promotional opportunities for women
c) 4/10 women stated in a survey by UCATT that bullying from managers was an obstacle
d) 73% of women have suffered sexual discrimination, harassment or victimisation
e) a whopping 90% have said having children has affected their job prospects.[4

If women are to make greater strides in the construction industry, they (as well as their male counterparts) should be accommodated for with “family friendly” policies.

All is not doom and gloom though.  An opportunity to encourage more women may arise as a result of the current skills shortage in construction, which will no doubt be emphasised following Brexit.  It is anticipated that 25% of the construction workforce will be made up by women by 2020. Construction Youth Trust, a charity aimed at young people to provide easy access to the construction industry, introduced the “Pledge a placement” initiative last year to counter some of the barriers young people face and to encourage young women to join the industry.  This involved getting firms to sign up and offer work placements to students.  If we are to encourage more women in this line of work then aiming younger children is a good place to start.

The media can also encourage this by publicising female role models who currently work in construction. An article published by Guardian in 2015 entitled, “Where are all the Women?” centred attention on Philippa Tuttiett, a young female building site worker (a link to the article has been provided below[1]). With the younger generation constantly seeking role models, what better way to get their attention but by talking about those women and the men supporting them, who have already taken the bold step to tackle the construction industry’s image of “it’s a man’s world”?

Kingsley Napley are proud to support the #BeBoldForChange campaign and are publishing a series of blogs to promote discussion around gender and the continued relevance of International Women’s Day.

Brandusa Tartaru-Marinescu was a Construction Partner in our Real Estate team and a member of the Diversity and Inclusion and LGBTQ & Allies Networks at Kingsley Napley.

[2] off S. (2010), “Appropriate to Her Sex?: Women’s Paricipation on the Construction Site in the Late Medieval and Early Modern Europe.”  In Women and Wealth in Late Medieival Europe, ed. Theresa Earenfight. Palgrave Macmillan, P 109-134.

Giving Something Back Team