Outcome 22: is the use of this Outcome a ‘postcode lottery’ for children in the UK criminal justice system?

Home Insights Blogs Criminal Law Blog Outcome 22: is the use of this Outcome a ‘postcode lottery’ for children in the UK criminal justice system?

In November 2020, we published a blog discussing the extent to which police forces in the UK were utilising the then relatively new diversionary tool known as Police Outcome Code 22 (‘Outcome 22’).

In this follow-up blog, we discuss what new police data reveals about the use of Outcome 22 three years after its introduction and the startling disparity of its use by different forces.

For all crimes recorded, the police must assign what is known as an Outcome Code. The Outcome Codes are numbered 1 – 22, and each number represents a different way that the police can record the conclusion of an investigation (for example, Outcome 2 is recorded when a youth is given a caution).

Outcome 22 came into force on 1 April 2019 following a recommendation in the landmark Lammy review into racial bias in the criminal justice system.

In summary, Outcome 22 can be used to resolve a criminal investigation when the police decide to defer prosecution until the accused has been given the opportunity to engage with a ‘diversionary, educational or intervention activity’. The activity will depend on the nature of the offending and is aimed at keeping the accused out of the criminal justice system. It offers an alternative to prosecution/further investigation if the police determine that once the activity has been undertaken, it is not in the public interest to take any further action.

In March 2020, we submitted FOI requests to the Metropolitan Police Service (‘MPS’), Greater Manchester Police (‘GMP’) and West Yorkshire Police (‘WYP’) regarding the frequency of use of Outcome 22 and the types of alleged offences for which it had been recorded. At the time, the MPS, GMP, and WYP were the UK’s first, second, and fourth largest police forces respectively as measured by total number of crimes committed in the force area (excluding fraud).

Unfortunately, neither the MPS nor the WYP implemented Outcome 22 until April 2020 so they were unable to provide any data on how often it had been used at that time.

The GMP had implemented Outcome 22 and responded, to report that it had been recorded against 347 offences with a created date between 1 April 2019 and 7 September 2020. Our full analysis of this data is set out in our earlier blog here.

Encouragingly, all the police forces from which we received data have now implemented Outcome 22. In terms of the frequency of its use, the data showed Outcome 22 was recorded against the following number of offences by each force during this period:

Whilst it is relevant to note that the total number of offences recorded by each police force varies significantly (for example, the MPS recorded more than twice as many offences as the WMP during this period), even after allowing for adjustments between local data recording procedures and systems, this data evidences a staggering disparity in how different police forces are using Outcome 22.

Part of the explanation may be that the MPS and WMP were slightly slower to implement Outcome 22. However, it is difficult to see how that alone can justify the vastly different rates of use between the MPS & WMP, and the GMP & WYP.

Perhaps most interestingly, the data provided by the WYP illustrates that the WYP may not simply reserve Outcome 22 for low-level offending. Of the 930 total offences, Outcome 22 was recorded against 590 ‘violence against the person’ offences, 29 ‘sexual offences’ and five ‘robbery’ offences. It is our experience that Outcome 22 is almost exclusively used for children. However, the lack of age data attached to these stats presents a missed opportunity to confirm that it is in fact children who are benefiting from this diversionary tool as we hope, even when dealing with more serious offences.

Overall, it is encouraging that some police forces seem to be embracing Outcome 22, even though the numbers still only represent a very small proportion of total offences. The fact that the WYP in particular has used Outcome 22 relatively extensively is promising, and the data does suggest that there is an upward trend in it being utilised as an outcome.

However, the data does also seem to suggest that it is a postcode lottery as to whether Outcome 22 will be used. More can and should be done to ensure that it is being actively considered in all appropriate cases regardless of their location in the country. This will ensure that all suitable suspects are being offered a diversion away from prosecution, with the intention of keeping them out of the criminal justice system in the long term.

For further information on issues raised within this blog, please contact a member of our criminal team.

Maeve Keenan is an Associate in the Criminal Litigation team. She has represented clients on a wide range of general crime matters including road traffic, public order, allegations of serious violence and both historical and current sexual offences. She is instructed on cases ranging from the initial stages of criminal investigations through to trials, including working on a number of Crown Court matters since qualification.

Tom Surr is the Head Paralegal in the Criminal Litigation Department of Kingsley Napley. He is a former police officer, having served in the Met Police for just over two years as the Dedicated Ward Officer for the ward of Kilburn in North-West London. He left the police to pursue a career in law, working briefly in the Crown Prosecution Service’s Extradition Unit as a paralegal before joining Kingsley Napley. He is passionate about police reform and improving society’s understanding of policing and police officers. 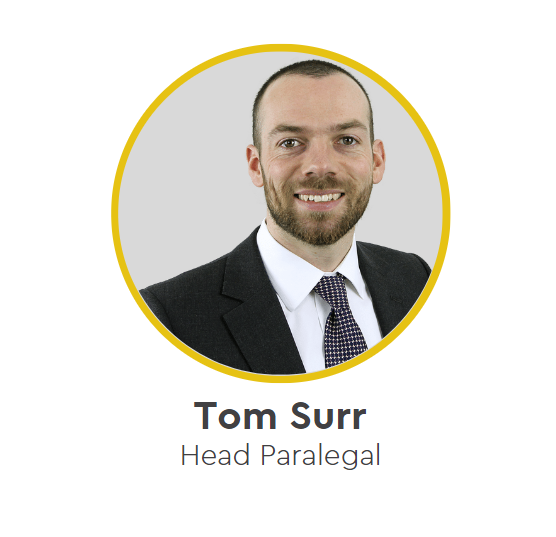 No-Fault Divorce: A Step Forward for the LGBTQ Community