Innocent until proven guilty: how universities must handle sexual allegations

This article was first published by University Business on 26 September 2019.

Although some institutions have been in the spotlight more than others, UK universities across the board have reported a sharp upturn in the numbers of complaints made about sexual violence in recent years; indeed some statistics put the figure as high as an 82% increase between 2014 and 2018.

The focus of debate is usually the failure by universities to protect adequately the rights and freedoms of the complainant. Too few reports have shone any light on the impact the investigation process has on the alleged perpetrators of sexual offences, be they student or member of teaching staff.

Universities need to consider fairness to all parties during investigations into allegations of sexual misconduct and not fall into a post #metoo trap of focusing solely on those bringing complaints.

The need for robust procedures

There is no standard or universally applicable procedure mandating the approach to the resolution of complaints of a sexual nature within universities. Despite the publication in 2016 of the Office of the Independent Adjudicator for Higher Education (OIA) guidance and the excellent work of Universities UK (UUK) in establishing some helpful guidance in this area, the processes for the investigation and adjudication of complaints of sexual misconduct still vary widely from institution to institution.

Schemes are not subject to direct external regulation, meaning they are immune from effective oversight (the OIA and, if necessary, the High Court can remedy serious procedural irregularities – but by then, the damage has usually been done).

I have seen many examples of critically important legal concepts being misunderstood and misapplied by investigators and panels alike - with serious implications for both sides. A recurrent mistake is the failure of institutions to understand and properly apply the correct legal test of consent. In one recent case, the panel described it in terms of the victim’s ‘internal willingness to comply’, instead of the well-established criminal test, which considers whether the alleged perpetrator has a ‘reasonable belief in consent’.

The use of this highly unusual definition of consent means that no person accused of a sexual offence where consent is in issue could possibly defend themselves against such an allegation. The implications for the impugned student were catastrophic - a finding of rape, even if not by a court of law, is a serious reputational impediment.

I have also seen disciplinary procedures that do not allow for legal representation at the first hearing meaning that those charged with (what are effectively) criminal offences are left to look after their own interests. How an unrepresented student is supposed to go about questioning the alleged victim is beyond me (leaving aside the unacceptability of such a course from the complainant’s perspective).

A scheme that claims to counterbalance this prohibition through allowing representation at any appeal stage, falls far short of protecting the interests of the accused – by then, the evidence has been heard and the opportunity to test the account given by the complainant is lost.

By way of best practice, a fit for purpose investigation and adjudication scheme would, as a minimum, include the following:

In this post #metoo era, it is undoubtedly right that we strive to achieve fairness and justice for complainants. Sexual misconduct and violence should have no place in our workplaces, universities, government offices, sports clubs – anywhere. However, we must not be myopic and let this obscure the important task of securing and upholding the rights of the alleged perpetrator; after all not all those accused of sexual misconduct are guilty and a university’s reputation may just as equally depend on this.

This blog first appeared on universitybusiness.co.uk

If you have any questions or require advice concerning allegations of sexual misconduct in the workplace, please email a member of our team in confidence.

Julie Norris is a Partner in the Regulatory department and specialises in advising in the health, professional services, legal and financial fields.

Innocent until proven guilty: how universities must handle sexual allegations 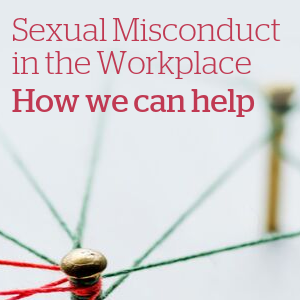 “Stealthing” conviction brings conditional consent out in the open