The confusion must be cleared away and guidance established if these deals are to remain trusted and useful, writes Iain Miller in The Brief.

Gagging orders were back in the spotlight this week when the women and equalities committee reported on non-disclosure agreements. Once more the legal profession felt the heat as MPs criticised its approach so far and called for more action from regulators.

It is a peculiar feature of NDAs that responsibility for the issues raised is spread across a wide range of bodies.

The courts have not traditionally supervised what are essentially private contractual agreements. But various other interested groups are proving influential. No wonder lawyers are confused on where they stand on use of the agreements.

What is becoming increasingly apparent is a need for authoritative guidance and agreed standard form documents that can be relied on by those dealing with NDAs.

This was certainly the view at a recent meeting of employment law specialists, law firm risk managers and ethics experts.

Attendees agreed that clarity is required about the precise boundaries of acceptable terms in the drafting and negotiation of NDAs and that the recent warning notice from the Solicitors Regulation Authority did not do this sufficiently. Equally, some said that a practice note from the Law Society, the body that represents solicitors in England and Wales, was equivocal.

Others raised concerns about shifting public attitudes. Hence a default form of wording being developed for the front of every settlement agreement — akin to the way in which standard form court orders such as freezing injunctions are used — was thought to be a good way forward.

It could state in plain English what was not/could not be prevented by the agreement, such as reporting to the police, regulators, medical practitioners and others. It would give solicitors the confidence they are acting appropriately, but also clients the confidence their agreement is bona fide. There is a danger that NDAs are becoming unnecessarily feared and toxic by their very notoriety.

Some argued that the use of NDAS should be the subject of greater controls and oversight within law firms given they have become such a risk factor. Suggestions included that NDAs might require approval at a higher level or that clients could only be allowed to enter into NDAs in employment cases with board approval.

Another idea discussed was whether a higher form of regulation should apply in relation to the use of NDAs in an employment context. NDAs could be signed off by a lawyer, specifically qualified and authorised to advise on such matters.

There has been a stream of events over the past 18 months that has drawn focus back to the legal profession on how it deals with NDAs. There is every reason to expect this to continue until the various issues surrounding NDAs are resolved.

As a profession, lawyers need to grapple with these or we risk government regulation or a total ban on NDAs, which would be a pity given that their use is not intended to be pernicious but often in the best interests of both signing parties.

A paper which outlines some of the key points and suggested areas for enhanced clarity around NDAs, which were discussed at the recent meeting of employment law specialists, law firm risk managers and ethics experts, can be downloaded HERE or via the link below.

If you have any questions or require advice concerning NDAs and/or allegations of sexual misconduct in the workplace, please email a member of our team in confidence.

Non-Disclosure Agreements: one year on 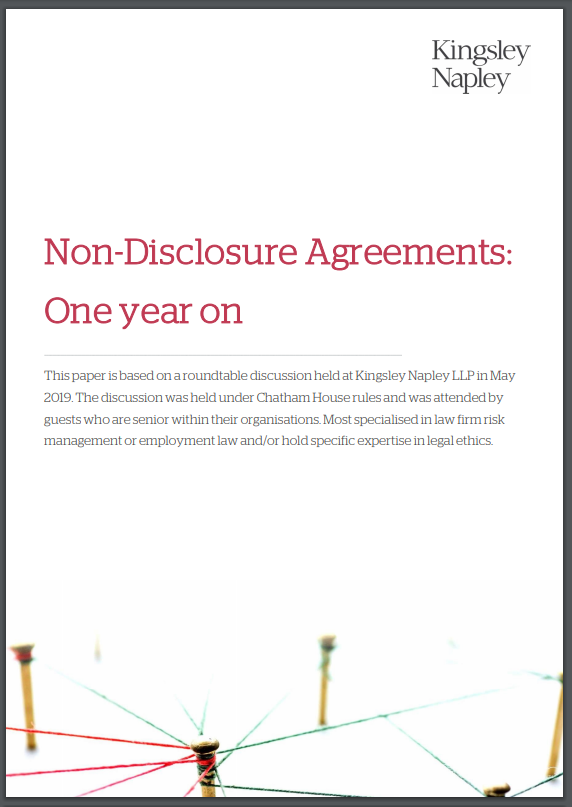