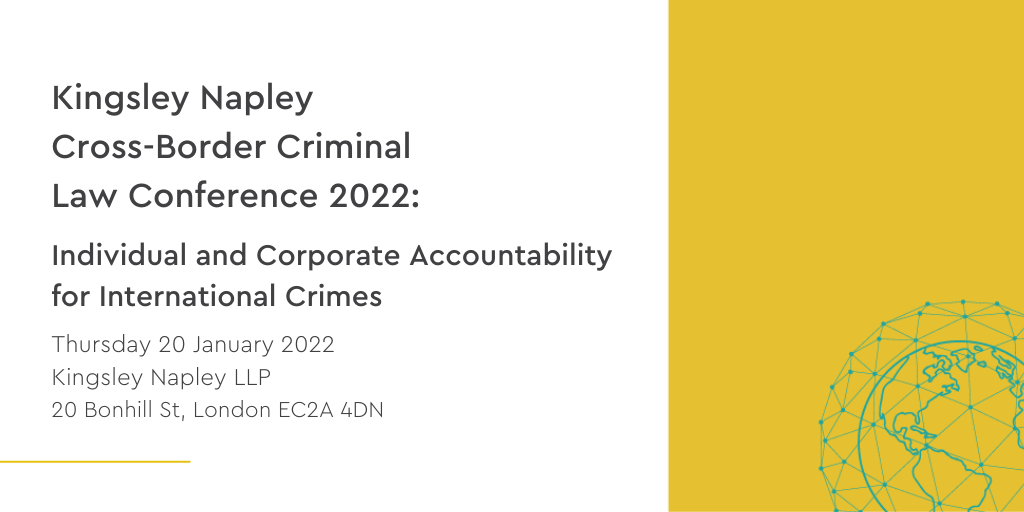 Kingsley Napley is pleased to present the next in the series of annual conferences on cross-border criminal law. The event will take place on Thursday 5 May 2022 in our London office and will focus on accountability for international crimes for both individuals and corporates.

The conference will open with a keynote address by Philippe Sands QC. Philippe is a well-known barrister, academic and author specialising in international humanitarian law. His award winning 2016 book, East West Street, describes the development of this area of law in the aftermath of the second world war, while his next book will focus on the Pinochet case in which he was directly involved. He has recently chaired a panel seeking to introduce a new international crime of Ecocide.

The first panel debate will reflect on the 20 years since the Pinochet case and discuss the current state of universal jurisdiction in the UK. The second panel will focus on the increasing scrutiny faced by companies and discuss corporate complicity in human rights violations and international crimes.

The conference will take place in our new offices in Shoreditch and will be followed by a drinks reception.

This panel will explore the Pinochet case and its legacy and examine the legal and structural reasons that account for the small number of universal jurisdiction cases that have followed.

In September 2021 France’s highest court overturned the decision of the Paris Appeals’ Court to dismiss charges brought against the cement company Lafarge for its complicity in crimes against humanity during Syria’s civil war. In the same month, the ECCHR asked prosecutors in Germany to investigate a number of companies for their complicity in modern slavery through their relationships with suppliers in Xinjiang, China.  Just two months later in November 2021 Swedish prosecutors indicted both the chairman and the former chief executive of Lundin Energy for their complicity in war crimes carried out by the Sudanese army and allied militia in southern Sudan from 1999 to 2003.

These cases in particular have cast renewed focus on what it means for a company to be complicit in human rights violations abroad and the mechanisms by which this conduct can be investigated, regulated and sanctioned. They have also coincided with the ever expanding requirements as to human rights and environmental due diligence and the increasing financial incentives associated with the perception of strong ESG performance.

This panel will consider what these developments mean for businesses (and those who advise them) in the context of criminal liability, compliance and corporate communications.