Brexit: what the Government (whoever forms it) needs to do now

Home Insights Blogs Brexit Blog Brexit: what the Government (whoever forms it) needs to do now

The dissolution of Parliament and subsequent election campaign put on ice the legal steps that will have to be taken in order to make progress in achieving Brexit. Give that both the Conservatives and Labour were committed to Brexit, whatever the make-up of the next Government attention needs to re-focus on what needs to be done through legislation in order to make Brexit possible in practice.

A very early priority will need to be the introduction to Parliament of what the Conservatives had called the Great Repeal Bill, or something very like it. In March this year the previous administration produced a White Paper  “Legislating for the United Kingdom’s withdrawal from the European Union”. This explained that a key part of the plan for Brexit was to introduce a Bill that would “wherever practical and appropriate, convert EU law into UK law from the day we leave”.  It is generally accepted that this will be needed in order to avoid a complete legal meltdown at the point that the UK leaves the EU.

Although the White Paper revealed some of the then Government’s thinking about what a Great Repeal Bill would contain, a number of critical legal issues were left unclear. One of the most important is the extent to which Ministers will be given powers to use secondary legislation as a vehicle through which to convert EU law into UK law. Whilst a Great Repeal Bill itself will convert swathes EU law, there will be a substantial amount that will need another mechanism – secondary legislation. In the White Paper, the need for this was said to arise in order to ‘rectify problems occurring as a consequence of leaving the EU’ and an example given is of environmental legislation which provides for an opinion of the European Commission to obtained before offshore gas and oil projects can proceed. When that legislation is domesticated, it will have to be altered either to replace the opinion of the European Commission with that of a UK body or to remove the requirement altogether.

A second hugely important issue, which will have to be addressed in a Great Repeal Bill,  and where the position is wholly uncertain, is what will be done in relation to the division of powers between the UK Parliament and the devolved administrations in Scotland, Wales and Northern Ireland. Many areas where the EU is currently active – for example agriculture and transport – are also areas where the devolved administrations have competence. In the White Paper a confused position was set out, with on the one hand it being said that it was anticipated that the outcome of the process was likely to lead to a “significant increase in the decision making power of each devolved administration”  and on the other a warning shot being fired as to the need to safeguard “the harmonious functioning of the UK’s own single market”, with the implication that in relation to some areas of devolved administration competence powers coming back from the EU kept in London. Over and above the political challenges that this will bring, there is currently no real clue as to the legal means through which it will be achieved.

At the moment, it seems more likely than not that the next administration will be a Conservative minority Government supported by the DUP. Although it might be foolhardy to make any political predictions now, if that is the outcome then the likelihood is that the Government will find it difficult to persuade Parliament to vote for a broad power to make secondary legislation and the DUP may extract a price for its support in respect of any attempt to ‘interfere’ with the current competences of the devolved administrations.

Other lawyers from Kingsley Napley are regularly blogging about the impact of Brexit, so follow our Brexit blog for the latest commentary.

Should you have any questions about the issues covered in this blog, please contact Adam Chapman or a member of our Public Law team. 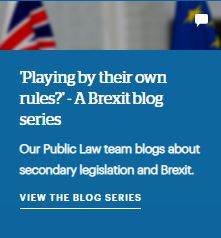 Something has gone wrong, and it’s not your fault. We help to challenge others professional conduct.

How to check if the law firm you are interviewing at is diversity friendly?

Politics interrupts Brexit? Theresa May calls for an early election

Brexit report on justice for families, individuals and businesses – the family law challenges ahead

The Great Repeal Bill and the regulation of law firms

Justice and Security - A series on the EU, the UK, and the outlook post-Brexit: blog #3 - Looking at the EAW

St Patrick was a Welsh expat - and London Irish are still special!

Justice and security: A series on the EU, the UK and the outlook post-Brexit: blog #1

The Brexit ruling - did the Supreme Court get it right?

The Brexit ruling - summary of the decision of the majority

The EU Data Protection Directive on Police and Criminal Justice Cooperation – BREXIT Impacts for the UK?

What Brexit may look like for the UK Construction Industry

Brexit – What EU citizens living in the UK need to know